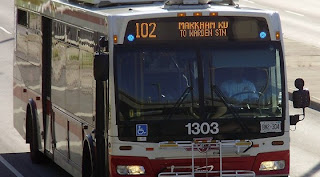 Public transit needs firm commitment from party leaders: CUTA: "'CUTA is pleased to see that each of the federal party leaders has made reference in support of transit; however, we remain concerned that transit has not been identified as a high-level priority,' said CUTA President & CEO Michael Roschlau.

'A long-term vision for public transit is critical in helping to tackle key national challenges currently facing Canadians, such as easing traffic congestion and gridlock, reducing emissions and improving quality of life,' said CUTA Chair, Charles Stolte. 'It plays a vital role in boosting Canadian cities' productivity and competitiveness, and accommodating population growth and a modal shift towards public transit.'"
at 8:39 PM No comments:

Angry Finch commuters: ‘Tell the mayor to walk in our shoes’ - thestar.com 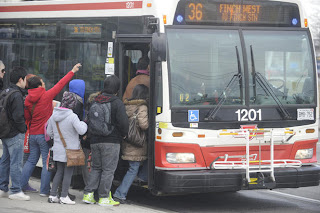 A queue of riders trying to get on the Finch West 36 bus on April 1, 2011.
COLIN MCCONNELL/TORONTO STAR
Angry Finch commuters: ‘Tell the mayor to walk in our shoes’ - thestar.com: "In this case, the Toronto mayor — notorious for his aversion to light-rail lines at street level — has cancelled a previously approved scheme that would have improved bus service on Finch with an 11-kilometre railway route connecting to the Spadina subway line.

Christopher thinks she knows why the decision was made, and she has no qualms about expressing her thoughts to a Star reporter, who — it should be noted — is the only white person aboard this particular iteration of the 36 B Finch West bus."
at 6:51 PM No comments: