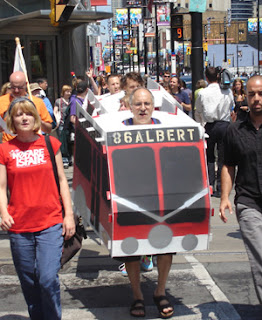 Free Transit flash-mob in downtown Toronto.
The Bullet | Socialist Project: "Toronto needs to radically decrease the dependence on private vehicles that has been structured into our living and working lives since the mid-20th century. On its own, Free Transit would not end car dependence. Doing that would require not only dramatic increases in transit capacities, but also measures to transform the way we use cars today."