The Case for Free Public Transit

torontoist : "Many cities already have some degree of free transit. Merced County in California offers free transit every August, and their ridership jumps by over 30 per cent. Columbus, Ohio, did a pilot study over the last two years, providing free bus passes to workers at four companies, and saw the share of workers using buses double.

The increased economic participation pays dividends, as do the positive environmental and health impacts from fewer cars."
at 2:39 AM No comments:

Humans depend on agriculture which depends on predictable weather

Peterborough | Globalnews.ca: "Local farmers in the Kawarthas say they are in dire circumstances, which will become more critical if the weather fails to bring the sunshine and warm temperatures.

Provincial minister of agriculture, food and rural affairs Jeff Leal visited some local farms Thursday to talk to growers about the impact of the cool, rainy spring and summer on local crops."
at 8:34 PM No comments:

Eventbrite: "The Alliance Against Poverty (AAP) has organized a Community Forum on Free Transit to develop a local campaign to make public transit free for everyone in Waterloo Region who lives in poverty. We would really like you to participate in our Forum.
The Forum will occur on Saturday, June 3rd from 2 to 4 pm in the fully-accessible downstairs hall of Historic St. Paul’s Lutheran Church. This church is located in downtown Kitchener at the corner of 137 Queen St. S. and Church St., just one block away from the Charles St. bus terminal. You enter the hall from Church St. via the large doors. The accessibility entrance is at the rear of the church off the parking lot, entering by the office door to the elevator. Free parking is available in the rear lot."
at 12:44 AM No comments:

rankandfile.ca: "Fare accounting costs, ticket and pass production costs, and various other costs associated with fares could be eliminated. Immensely expensive transit pass programs can be buried. Even with tokens and tickets eliminated, the Presto card system in Ottawa and the Greater Toronto Area has been enormously expensive. While transit users will save a bit on fares with Presto, the province’s auditor general says hundreds of millions have been blown on its installation.

All these resources could be freed up and focused on better transit services, more jobs, and better infrastructure. Transit workers can be redirected to other parts of the service, such as attendants at major transit stations, retrained for operating, maintenance and other services."
at 3:22 PM No comments:

EDITORIAL: It's time to stop the Scarborough Subway

Spacing Toronto : "Boosters, beginning with but not limited to Mayor John Tory, claim that what the City is doing is building transit, finally. But by any reasonable review of the facts, the SSE is really about NOT building rapid transit, and indeed making Toronto’s existing transit system even less functional than it currently is.
It is a move backwards, not a move forwards."

Email ThisBlogThis!Share to TwitterShare to FacebookShare to Pinterest
Labels: #subway

Success of free passes for youth in Kingston

Public transit: A modern necessity: "Student passes work seven days a week, allowing students to find work; youth who may never have had that option before. The passes are valid from September to September, so students may use them for months after graduating. Community groups and public educators in Kingston have told me that this has been the best anti-poverty initiative for youth that the city has ever undertaken. "
at 11:07 PM No comments: 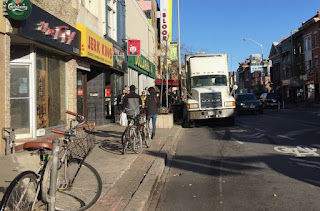 TreeHugger: "But what I find most interesting is the breakdown of that 72 percent- 53 percent of the visitors come on foot, and they do get their own dedicated space, but it is shared with the retailers who fill it with stuff, trees, newspaper boxes, parking meters. When you look at what is left for walking, it is almost nothing, barely enough for people to get by each other.
19 percent come by bike, and they get worse than nothing, they have to ride down a thin strip between the parked cars and the streetcar tracks, an absolute death zone where a poorly parked car or truck or a door opening forces cyclists into the tracks.

Only 4 percent of the people hitting the street come there by car, yet they get to store their metal boxes on close to 30 percent of the road allowance."
at 11:39 PM No comments: