Toronto Star: "Fortunately, there is a more reliable route to improved transit in Toronto. Experience from around the world shows there are three key ingredients for a successful urban transit system. Regrettably, Toronto has none of these currently in place."
at 5:39 PM No comments:

Toronto Star: "What’s the big idea: What if public transit in Toronto was free? “Big Ideas” are always met by naysayers with “It can’t be done.” However it has been done and is being done. The city of Hasselt in Belgium is but one example. Transit fares were abolished in 1997 and ridership was more than 10 times higher by 2006.
How will the big idea work: Benefits: Faster boarding and exiting; low-income people are the primary benefactors; road traffic is greatly reduced benefiting drivers as well; air and noise pollution are reduced; fare-collecting costs eliminated."
at 9:49 PM No comments: 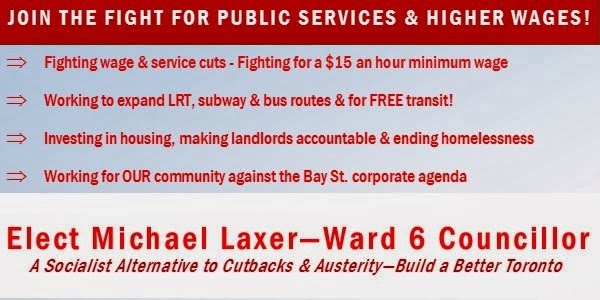 Elect Michael Laxer - Ward 6 City Councillor 2014: Michael Laxer for City Councillor Ward 6: "As Ward 6 City Councillor I will fight to see the Waterfront West LRT plan brought back to connect our Ward with Toronto's downtown in a faster and easier direct route. I will work to see transit expanded city wide and to have revenue tools put in place to finance and maintain this expansion. I will work to integrate GO Transit and TTC routes within the city so that people can use the Lakeshore line as if it was a subway.  I will also fight against any agenda to raise fares and will work towards FREE transit, which should be the environmental and social goal of any government."

Email ThisBlogThis!Share to TwitterShare to FacebookShare to Pinterest
Labels: #leaders

The Pulse: Public transit tops priority list | Toronto Star: "It may still be early days in the municipal election campaign, but one thing is already abundantly clear: Public transit is a key issue in this year’s race."
at 11:52 PM No comments: