Mayor’s opponents building coalition to derail subways - The Globe and Mail: "Dismayed by the dramatic dismissal of TTC general manager Gary Webster, opponents of Rob Ford are building a new coalition of council votes to derail the mayor’s subway plans."

McGuinty says the "time for talk is coming close to an end" and the city needs to get on with building public transit."

thestar.com mobile: article: "When Ford got elected he cancelled Transit City, summoned Webster to his office. Webster promised to outline the TTC’s current position on LRTs versus subways. A staff report was prepared, but Ford stopped its circulation. Instead, he wanted Stintz to engineer Webster’s dismissal. And he demanded Stintz not circulate the report.

Stintz kept the report quiet, but refused to do Ford’s dirty deed. Webster’s views actually made sense, she thought, and were certainly not a firing offence."

TTCriders ask: “Why silence Gary Webster?” | Toronto Environmental Alliance: "“Why are they firing Gary Webster,” asked Jamie Kirkpatrick, spokesperson for TTCriders. “Are they afraid he will do his job and provide an objective analysis of how transit expansion should happen in Toronto?”"

Toronto City Council Defeats Mayor, Resurrects Transit City | Planetizen: "In a stunning blow to Mayor Rob Ford -- who, on his first day in office in 2010 scrubbed the "Transit City" plan in favor of an ill-thought out and unfunded subway scheme -- the Toronto City Council has quashed his plans and resurrected the old one."

Email ThisBlogThis!Share to TwitterShare to FacebookShare to Pinterest
Labels: #tcity

Do you sense the invisible hands of #tarsands in Toronto? 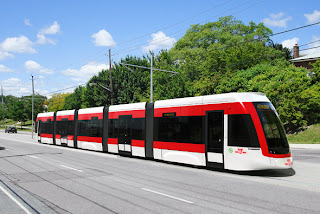 Transit and planning experts rally against Ford's plans: ""Planning for desperately needed public transit expansion within the City of Toronto... is currently in a state of disarray and the Mayor's current plans will not provide cost-effective solutions to the City's pressing transportation needs," the letter reads. Perhaps the collective clout of the signees will sway council when it convenes to determine the immediate future of transit planning in Toronto. That's clearly the idea."


Why send people underground so cars can be on the surface? Subways can only be justified in very heavy density. The future of cities is carfree surface transit. Funding? Why do we argue over a few million dollars for transit when congestion costs billions and is choking the economy, energy wars are raging, more than a million dollars a day goes out of town for gasoline, and oil is running out? The oil trolls want to squeeze the last dollar out of the last drop of oil, no matter what the cost to society. It is time for people to organize and demand FARE-FREE PUBLIC TRANSIT. It doesn't cost more, it actually saves more than it costs.

Yes, tarsands. Even if not one drop is burned in North America, oil and petrol are global markets. Many people hope to get rich from tarsands. They will be disappointed. Only a very few will profit. The cost to the biosphere will be unbearable.
at 7:38 PM No comments:

Email ThisBlogThis!Share to TwitterShare to FacebookShare to Pinterest
Labels: #tarsands

No, you don't need that much parking | Better! Cities & Towns Online

No, you don't need that much parking | Better! Cities & Towns Online: "The change reflects the evolution of the city's parking standards, The Globe and Mail reports. Since 1997, Vancouver's transportation plan has capped downtown parking and banned new roads—helping to reduce the number of car trips, even while the number of jobs and the overall number of trips into the city's center have grown."